5 Steps to Improve Google Rank without Being Penalized

Blog Post Length: What is the best length for SEO in 2020?

Last year, Google announced the launch of a new algorithm that will crack down the sites that use Intrusive interstitial pop-ups. The algorithm takes into effect from Jan – 10 – 2017.

Google ads up a statement that, they are dropping “Mobile-friendly label from their search results” because 85% of sites were turned into Mobile Friendly.

Then, what is this new algorithm Mobile Intrusive Interstitials Penalty? Google Says, “Where ever content is not easily accessible to the users in mobile views will not rank quickly”.

But there is some exception for some pop-ups such as asking for Legal notices, login dialogue boxes, and banners. These Pop-ups that don’t take more than 15% of the mobile screen and easily dismissible Pop-ups were all unaffected in this Mobile Intrusive Interstitial Penalty.

What is Mobile Intrusive Interstitial Pop-ups?

Two Years ago, Google Introduced the Mobile-Friendly label for all the domains after then, domains that are responsive will get better rankings then.

On 21 April 2015, Google released a mobile-friendly update in their algorithm where all webmasters asked to take action to make their site responsive so that their website contents can accommodate all screen sizes without a horizontal scroll bar.

This has improved a lot in terms of user experience. On Jan – 10 – 2017, Google announced another update appending Mobile friendly design and that is called as “Mobile Intrusive Interstitial Penalty update”. Intrusive interstitial is also called Pop-ups.

They tend to bring a bad user experience because most webmasters use them to display Ad-sense ads, call to action, and other banner ads.

These types of Intrusive interstitials make it frustrating because users won’t able to access the exact content of the page that they are looking for.

This announcement was not decided overnight but was planned some years ago.

Since Aug – 2015 Google first announced that they are working to ban pop-up interstitials and consider it as a negative ranking factor. They also added, “WE don’t have anything to announce at this moment, but it’s our future plan”.

Mobile traffic in recent decades was growing enormously and Google continuously insists on a better user experience in their mobile traffic. They noted in a speech, that more than 78% of traffic to a website was coming from a Mobile search.

Marcus Andrews, HubSpot marketing manager in his Google mobile-friendly update reminder says, “Google is very focused on the user,” “Marketers are always looking for hacky ways to increase traffic and conversion rates, and every once in a while, Google needs to make a correction to improve the user experience.”

With Pop-ups and Modal windows, there proved to be an average 3.09% CTR with some high-performing pop-ups reached a 9% conversion rate, a recent study reported. It adds more value than Google’s focus on the mobile user experience. 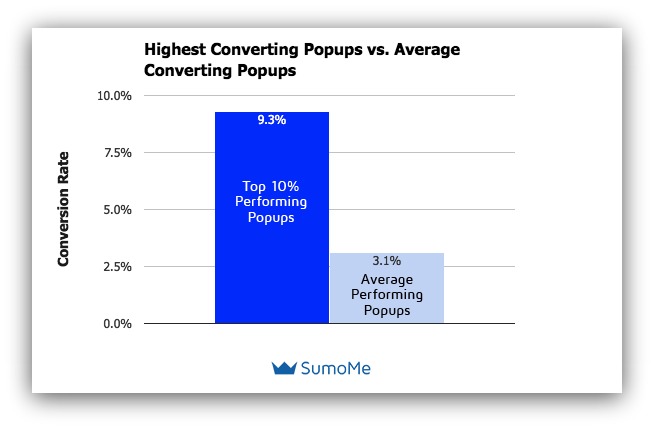 How to Identify Intrusive Interstitial?

Google from their webmaster blog said, “Sites with intrusive interstitial ruining user experience will negatively impact their site ranking”. So, as a webmaster, you just need to check your site against those intrusive pop-ups and fix them ASAP! to stay safe from Google Penalty.

There are three types of Intrusive pop-ups Google declared as subject to penalization.

The first one is a Regular Pop up or modal window blocking the entire content of the page. These pop-ups were usually shown with a dark semi-transparent background.

The second one is a standalone, full-screen interstitial that occupies the entire screen. If you want to see the actual content you must scroll up to see the rest of the content. It is just like regular pop up but there will no preview of the actual content and it hides entirely behind this popup.

The third one is also a standalone, but it occupies the entire layout of the screen. This will block the actual content and there will be no preview at all. The best example I can say is Live Chat Box that automatically appears over the screen when a web page is loaded.

This is however to help the visitor, but it ruins the user experience because not all visitors need to chat. Hence it may ruin user experience if all they want to do is read the content they are looking for

As earlier in this post, I mentioned that there are some exceptions for the Intrusive pop-up interstitials, and not all the interstitials will be penalized, as Google says. Let’s see what are those?

Age verification Pop up blockers was required in age-sensitive content such as adult website or alcohol information sites.

Cookie consent notifications were required by the EU and Google poses no penalty over this pop-up.

Display Pop-ups such as Email subscription Forms will not be punished as long as they do not take a reasonable amount of space.

Google hasn’t mentioned the exact sizes, but assume that it will not occupy more than 15% of mobile screen sizes in both Landscape and portrait mode.

This further goes with how you approach this update by respecting users’ screen space and size will determine your penalty level. Re-designing pop up interstitial ads make them occupy lesser space with proper A/B test could be a change and make you stay away from penalty.

Google always wants to provide a better user experience and it is our foremost duty to provide the same as a webmaster. Respect user screen size and provide the actual content.

So far, no one knows what Pop ups be punishable, and what not?

Only Google knows, as a webmaster respect users and work with responsibility. Watch your interstitials and take action to avoid penalties.

We do not know how strong this ranking factor would be, but Google shows a confirmative strong preference over this intrusive interstitial factor.

If you receive any warnings as Mobile intrusive Penalty from Google Search Console, follow this action immediately to recover.

Still, you have doubts about the new Intrusive interstitial ranking factor, Ask here I will provide you with the best solutions.

This site uses Akismet to reduce spam. Learn how your comment data is processed.

by Priya time to read: 5 min